Home›Articles›CONDEMN THE KILLINGS OF PROTESTERS IN COLOMBIA, FREE SIMON TRINIDAD!

CONDEMN THE KILLINGS OF PROTESTERS IN COLOMBIA, FREE SIMON TRINIDAD! 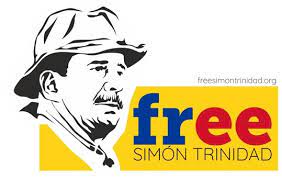 CONDEMN THE KILLINGS OF PROTESTERS IN COLOMBIA, FREE SIMON TRINIDAD!

The Committee to Free Simón Trinidad condemns police murders and violent repression of protesters by the
Colombian government. In the last ten days, Colombian police and military forces killed at least twenty-six,
protesters in the streets protesting higher taxes and government cutbacks. It is also reported that there are
379 protestors who have disappeared . Backed by the U.S. government and President Biden, nobody will be
prosecuted for these police killings and political repression.
On April 28, 2021, Colombian social movements, students and labor unions began marching in the streets to
protest the Duque government’s attempt to impose a regressive value added tax (VAT). VAT targets basic
goods and service and penalizes workers, peasants, students and small business owners who are suffering
from sky high unemployment due to economic crisis and the COVID pandemic.
Peaceful protests took place in cities all across Colombia, but rather than listen to the people and engage in
dialogue, the Colombian government of President Ivan Duque sent paramilitary police (ESMAD) and the
army against protesters. These forces attacked protesters in Cali, Bogotá, Barranquilla, Bucaramanga, and
other cities all across the country.
Colombia is the most dangerous country in the world to be a trade unionist. The U.S. government spends
billions on war and repression and operates seven military bases.
The Duque regime withdrew the regressive tax, but the protesters are pushing forward determined with
broader demands. One demand is that President Duque comply with the Peace Agreement of 2016 that was
negotiated with the FARC. Duque’s government is failing to abide by the peace accords and has undermined
the special peace court (JEP), failed to implement agricultural reforms, and failed to re-incorporate a large
number of political prisoners. The Colombian government has also failed to protect participants in the peace
process. Two hundred and forty-six former FARC combatants have been assassinated by death squads.
The Colombian government has made no effort to reincorporate the Colombian champion of peace and
former FARC peace negotiator Simón Trinidad. Trinidad is a political prisoner held by the United States government. Simón Trinidad should be freed as his presence in Colombia would reinvigorate the peace
process. We call on all friends of peace and justice to work for Simon Trinidad’s repatriation.
Victory to the Colombian National Strike!
FREE SIMON TRINIDAD!